I get the joy of being apart of a book tour which happens to be my first book tour!!! We will be diving into the wonderful world that Sofie Darling has laid out for us along with a give away of $25 gift card to Amazon! 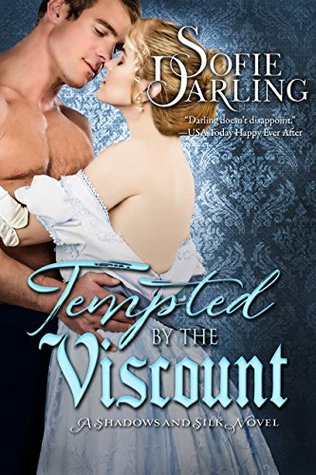 Tempting the Viscount by Sofie Darling

Lord Jakob Radclyffe left his past behind in the Far East. Or so he thinks until a ruthless thief surfaces in London, threatening to ruin his daughter’s reputation. With the clock ticking, Jake needs the scandalous Lady Olivia Montfort’s connections in the art world to protect his daughter’s future.

Olivia, too, has a past she’d like to escape. By purchasing her very own Mayfair townhouse, she’ll be able to start a new life independent from all men. There’s one problem: she needs a powerful man’s name to do so. The Viscount St. Alban is the perfect name.

A bargain is struck.

What Olivia doesn’t anticipate is the temptation of the viscount. The undeniable spark of awareness that races between them undermines her vow to leave love behind. Soon, she has no choice but to rid her system of Jake by surrendering to her craving for a single scorching encounter.

But is once enough? Sometimes once only stokes the flame of desire higher and hotter. And sometimes once is all the heart needs to risk all and follow a mad passion wherever it may lead.

The string quartet struck up the opening notes of a waltz, the crowd raised its voice in a unified cheer, and Lord St. Alban held out his hand to her. “May I have the honor of this dance?”

She should say no. She needed to say no.

She couldn’t. Not without inviting more scandal from the odd curious eye that might be observing them. She’d endured enough scandal these last six months to last her a lifetime.

She stepped a hesitant foot forward and held out her hand, willing herself to look up at him. Most extraordinary were Lord St. Alban’s eyes: arctic blue rimmed in navy. They should be frosty, but they weren’t. They burned with the whitest heat of a blue flame.

She’d never entertained the idea that one could be incinerated by a waltz. But when he took her hand and her pulse jumped, she suspected that she would be lucky to escape this dance entirely unsinged.

She steeled herself and asked, “Shall we begin?”

On a nod, he pulled her toward him and set their bodies into motion. Her gaze remained resolutely fixed over his shoulder in the hope of foiling any attempt at small talk on his part. Her hope was immediately dashed.

“It is a strange sensation,” he began, “to have your body so completely in hand and, yet, the essence of you so far away.”

A shocked laugh escaped her. Words like body and essence could make a lady go speechless. They weren’t words used in polite circles, particularly in the way they’d crossed his lips, as if a promise was located somewhere inside.

Desperate to summon an upright ancestor or two, she said, “You know nothing of my body or my essence.”

Disclaimer: ” I received this e-book at no cost to me from Sofie Darlings assistant; my review is my honest opinion and given without any influence by the author or publisher.”

The right Honorable Jakob Radclyffe, Fifth Viscount St. Alban, was the sort of man a woman could marry. But Olivia wasn’t the sort of woman a gentleman married . . . not anymore.

Starting right into this book it brings you into this world they have set. Olivia being a very strong woman and almost seen as a feminist which was something that would be taboo of the time. Then came Jake into the picture which tempted Olivia to her core. Yet, Motivations can sometimes not be clear as his daughters acceptance into society is being helped. Olivia finds herself becoming more and more curious of Jake which set a wrench in what seemed like fate.

Of course Jake observant off by Olivia’s former marriage, as any man would during that time, but his desire for her makes it hard from him to resist her. This in turns sends them into a beneficial arrangement with Olivia. At first I will admit I did not like Olivia as I felt disconnected but I understand ladies of her time and marriages. Even a lot of women today seem to want the marriage Olivia wants including myself. But, her past marriage scorched the surface where her ex wanting a marriage of statues and society. This happens to be marriage which was normal of that period.

Olivia never entertained the idea that she could be incinerated by a waltz.
But when Lord St. Alban took her hand and her pulse jumped, she suspected that she would be lucky to escape this dance entirely unsinged.

There was an immediate attraction between Jake and Olivia which was understandable. That’s how I would want it to be. Of course going their separate ways once that mutual arrangement is satisfied. There were foreshadowing of future installment between Mina and Hugh. Mina and Hugh right now are at the young age of 15 & 17-ish.

Through out this book there was a plot line which emotional complexities and could be a great read for many. There were moments that seemed… Flowery or ornate and which left me curious. Leading me to read back wondering if I missed something or needing a better understanding of what happened. Which sometimes did not help. Much like Mrs. Darlings first book that had me highlighting words to understand the meaning or translation. Yay for kindle translating it in real-time!

From the inauspicious beginning with unexpected romance yet completely predictable for most readers. Yet, there is excellent storytelling like the first book from Mrs. Darling. The characters from the first book are very interesting as well the possibility to grow on future books is ginormous. This book happens to be a standalone in an interconnected series. Which is amazing and I was not prepared for this knowledge as I kept thinking the characters from the first book would make more of an appearance then they did. But it was nice getting to know more about Olivia in the second book. I’m hoping to see Olivia’s uncle from the first book in the third installment along with Percy, Olivia’s dead/resurrected husband. This reasoning with the flowery language is why I gave this 4 stars out of 5. The flowery language helped passed this story off and prove true to the time. I recommend this book!

is an award-winning author of historical romance. Her debut novel, THREE LESSONS IN SEDUCTION, won the Writers’ League of Texas’ Manuscript Contest in the Romance Category in 2016.

She spent much of her twenties raising two boys and reading every book she could get her hands on. Once she realized she simply had to write the books she loved, she finished her English degree and embarked on her writing career. Mr. Darling and the boys gave her their wholehearted blessing.

When she’s not writing heroes who make her swoon, she runs a marathon in a different state every year, visits crumbling medieval castles whenever she gets a chance, and enjoys a slightly codependent relationship with her beagle, Bosco.

What Is That Book About
SOS Aloha
The Tired Buyer

2 thoughts on “Book Tour, Giveaway & Review: Tempted by the Viscount by Sofie Darling”