Super excited to be sharing with you Demons for Tea by Kate Morgan! Kate is running a giveaway which the link is provided below along with more stops!

Demons for Tea by Kate Morgan

Tagline: Kicking ass and eating ramen: An exorcist’s life ain’t like the movies. 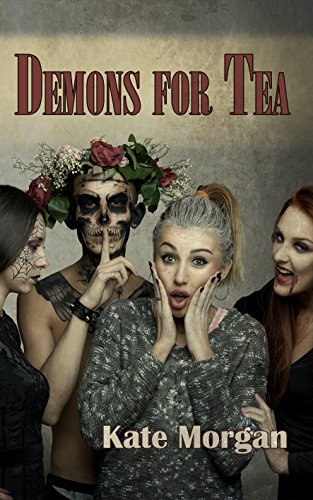 Ex-priest Denis Kaine’s surviving on ramen and kicking otherworldly creatures off this planet. It’s all noise to fill his chasm of hate and guilt inside from letting his twin brother blow his brains out because he’d been possessed. Denis should’ve known. He should’ve seen. He should’ve… everything.

His survival techniques are no match for Emma Koroleva, the 1200-year-old entity he freed from imprisonment in Rome. She’s powerful, she’s got major attitude, and she hates ramen.

She changes into various poltergeists and forces Denis to “exorcise” her. Denis gets paid, they eat real food, and she toys with seducing him. Denis starts to think he’s living in the sitcom from hell until he learns his dead brother’s become the plaything of something big, strong, and evil. Screw sitcoms. Denis is about to prove why his rep is legendary in the spirit world.

Someone knocked at the door.

On a Sunday afternoon? If it was a Girl Scout, she’d be disappointed. My entire liquid income consisted of the twelve dollars and three quarters in my wallet. I pulled off the Roman collar, so she wouldn’t get a bad impression of priests in general and unbolted the door.

It crashed open with a blue-green-flowery gust of wind. I spun around and slammed it shut. My messenger bag stood ready within arm’s reach on the kitchen table. All I had to do—

“It is ridiculously cold outside. Where is your fireplace?”

A black-haired woman as tall as—no, taller than me by an inch or two—strode into my living room and back again.

“Bah. Are you a herder of reindeer that you can stomach this cold without a fire? I am not. I require heat and coffee and food.”

Her flowered dress looked more suited to August than late March. Her windblown hair reached below her waist, the fluorescent light striking midnight-blue highlights from it. The colors of her energy reminded me of something, but I couldn’t place it.

“Look, whoever you are, I didn’t invite you here.” I opened the door, which put me even nearer to my messenger bag. “Out.”

One beat: I flipped open the front of the messenger bag. Two beats: I snatched the squeeze bottle I kept holy water in. On the third beat I popped the nozzle and squirted the perpendicular strokes of a cross at her.

“Merda.” She shivered and vanished.

Whatever she was, she moved faster than most entities. As I repacked the holy water, it hit me that she’d said “shit” in Italian not like she was angry. More like she was annoyed because I’d gotten her dress wet.

Baker of brownies and tormenter of characters, Kate Morgan celebrates the the day she jumped the wall with as much enthusiasm as her birthday. She grew up watching Hammer horror films and Scooby-Doo mysteries, which explains a whole lot.

When she takes a break from inspiring nightmares, she writes ex-nun PI mysteries under her real name, Alice Loweecey. In her spare time she can be found growing vegetables in her garden and water lilies in her koi pond.

(It’s confusing, I know. Facebook wouldn’t let me create an author page under my own name, so I had to use my MC’s name. Branding. It’s so much fun.)