Mr. Green reached out to me to review his books and this is the 2nd of two he gifted me to read! Of course I have to throw up a teaser – As i do for all the books I am reading that I’m not doing apart of a tour through one of the book tour agents. Be on the look out for my review but until then here is a teaser on Handful of Might by Joel Green.

Blake Drysdale is an aviator, smuggler and all-round crook.Accepting a mission from British Intelligence, he and his crew find themselves dropped into the chaotic final days of the Vietnam War in pursuit of a fugitive Nazi war criminal and a fortune in gold. On the run, they take flight across the globe and discover a shocking conspiracy stretching back to the Second World War… which Blake may or may not have already known about.Caught between a mad CIA agent’s obsession and deadly Soviet revenge, Blake Drysdale must fight to protect the world and his friends… and let’s not forget about the gold.

No concessions were made to style or formality. Scuffed boots met rumpled tan slacks, continuing up to an oversized bomber jacket with a roundel patch on the shoulder. The jacket alluded, with a small bulge, to the presence of a pistol at the man’s hip.

It would be unfair to say he had a swagger. He moved with confidence, but also a barely-perceptible limp on his left side. Dark eyes were set in a dark face, speaking of sub- continental ancestry. He was of mixed blood, British Indian, and probably disinclined to discuss it. A thin cigar protruded, unlit, from a mouth twisted in a crooked half-smile.

The smuggler entered the dim, smoke-filled bar room; the same place can be found in any city of the world. This one was in Saigon, and Jimi Hendrix had taken up residence, beating out his rendition of Hey Joe from the jukebox in the corner with the volume turned low. Quietly screaming, like the rest of Vietnam. Numerous pairs of eyes – curious, suspi- cious and hostile – followed the man as he strode briskly into the gloom.

The other patrons were soldiers, most of them dwarfing the diminutive newcomer, but they noted his ease and econo- my of movement that marked him out as a danger-man; one who could hold his own, who you didn’t start a fight with unless you really wanted a fight.

Blake Drysdale didn’t return their stares, but headed pur- posefully toward a booth at the rear.

‘Evening,’ he said, sliding in to take a seat with the three Marine Corps soldiers. Blake Drysdale’s accent was some- where between middle and upper-class Londoner. The Ameri- cans eyed him.

‘You’re the guy?’ asked the one across the table. Crew- cut, southern, black, scar across the forehead – his uniform bore the silver oak leaves of a Lieutenant colonel.

‘I’m a guy,’ Blake replied mildly. The colonel glanced at his companions. ‘I’m Henderson – these guys are Smith and McCormack. Le Minh said you work transport jobs; says you’ve got a floatplane.’

Blake sighed and took a box of matches out of his pocket. ‘Flying boat,’ he said mildly.

‘What?’ ‘It’s a flying boat. Floatplanes are smaller, and have pon- toons. Flying boats have hulls.’ He struck a match and lit his cigar, momentarily illuminating the booth so he could better see the faces of the soldiers. They were tired faces that housed dispirited and bloodshot eyes. The war was long lost, their continued presence drawing out defeat into years.

‘I couldn’t give a rat’s cock what you want to call it,’ Henderson snapped. ‘Are you up for a consignment?’

‘I’m here,’ Blake pointed out, bluish smoke oozing from his nose. ‘Though I should probably tell you I don’t move drugs. At least not the hard stuff – ganja’s okay, but my crew tends to pinch a lot of it whenever it’s onboard. Bloody young people.’ He grinned. ‘It’s not drugs.’ ‘Weapons?’ The soldier shook his head. ‘Well sir, I do prefer to know what it is I’m carrying,’ Blake said. ‘If it will leak acid, or explode, or land me a life sentence, that sort of…’ 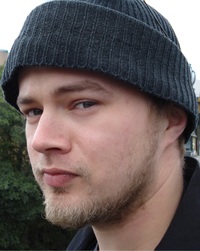 Joel Green was born in 1984 in Australia. He works as a carer for people with intellectual disabilities and in his spare time he is an author of adventure thrillers, horror and science fiction novels.